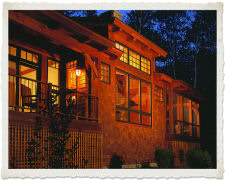 A story first published in “The Getaway Home” in 2004. Reused with permission by The Taunton Press. Author: Dale Mulfinger … Photos by: Rob Karosis “A Simple Design Deep in the Woods” A one-mile hike in the snow doesn’t deter a New Hampshire couple from making regular weekend treks to their remote cottage getaway. The first time they saw the 218-acre parcel of land on the Internet, they knew it was where they would find the tranquility they sought. Architect Ward D’Elia designed a simple, 2,000-sq.-ft. timber-frame cottage with fine-crafted woodworking and ironwork details. Whether the couple is snowshoeing to the cottage under starlit skies with a weekend’s worth of supplies strapped to their backs or driving down the rugged gravel road during milder weather, there is nothing more exhilarating to them than catching the first glimpse of their hideaway within the forest of 100-year-old pine and hemlock trees.

The homeowners treasure their property’s pristine qualities. The land is part of an ongoing 600-acre conservation initiative that includes frontage along two ponds. The owners negotiated an arrangement to build their getaway on the shores of one pond, where a few cabins had already been built, in exchange for leaving their property along the other pond undeveloped. The desire to blend in with the wooded environment drove the understated design of this efficient but charming Timberpeg®-framed cottage. Few trees were felled for its construction. The house is not visible from the pond, but careful tree trimming allows the homeowners to catch sight of the shimmering water from inside the cottage.

Despite its simple floor plan, the house has a distinct sense of charm and craftsmanship that’s derived from the woodworking, ironwork, and masonry details both inside and out. Outside, the underside of the cottage was exposed since it was built on stilts, but wood trellis trim hides the base while adding a richly textured detail to the cedar-shingle facade. The exterior window trim of black anodized metal outlines the windows against the warm wood and brings added quality and depth to the openings. Even the brackets-indoors and out-provide lateral bracing that’s both decorative and structural. All elements add to the cottage’s enchanting character. 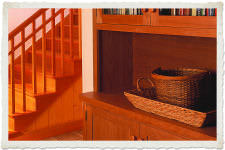 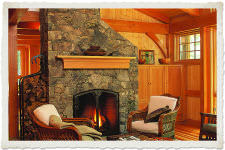 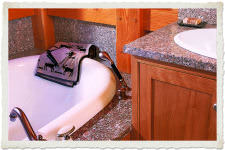 “Planned for Weekend Use”

The cottage is designed specifically for weekend visits, which means the floor plan is simple and straight-forward without any formal spaces. That way, there’s no fuss or muss when homeowners and guests hurry in and out of the cottage while carrying luggage and recreational gear. Adding to the informality is an open floor plan designed without hallways. Downstairs, the living room separates the couple’s bedroom suite from the kitchen and dining room, so the homeowners can sleep late while guests clatter in the kitchen making breakfast.

Upstairs, a loft like study serves as a transition area between two bedrooms.

Keeping things simple and protecting the land have paid off for the homeowners. Their surroundings offer the possibility for magical encounters. The homeowners have seen a pair of owls eavesdropping outside the cabin while the radio played. And one winter day a moose sauntered up to a window, surprising one of the owners who was curled up in the window seat engrossed in a good book. Upstairs, two bedrooms flank a study that overlooks the living areas.