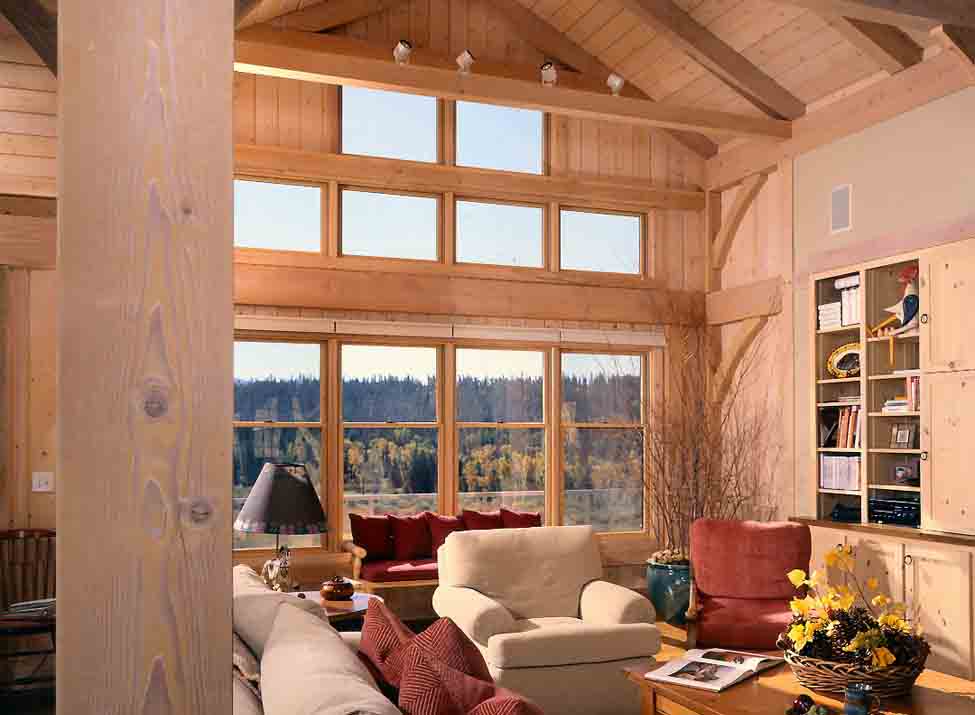 Technology continually advances, as evidenced by the powerful computers that we carry in our pockets (that we sometimes also use as phones) and the radar and optical systems in our cars that can brake before an accident. With all of this relentless progress, the traditional charm of a timber frame home can be quite refreshing. However, while a modern timber frame home can have traditional style, modern advances make the home more inviting and earth-friendly. One example of this trend is found in the windows of a modern timber frame home. While they can look the same as traditional windows, modern technology allows them to be more efficient than windows of the past. Read below on how modern windows achieve this efficiency and also offer convenience not found in the past.

Originally, windows were composed of only a single pane of glass. This type of window is very inefficient, since heat can readily move from one side of the window to the other through conduction across the large pane. With the advent of double paned windows, the amount of conduction (and thus heat loss or gain through the window) was decreased. This change allowed for windows to become about twice as efficient insulators as they were before, measured by their U-factor. However, filling the space between the glass with a heavier gas than air will increase efficiency further, since heavier gas has poorer convection currents. For a typical half-inch thick window, argon is used and can help increase efficiency by more than ten percent. Krypton is an even better choice but is considerably more expensive, so it is typically only used in thinner windows.

If you have heard a window being referred to as low-E, this is a reference to the glazing on the window glass. Glazings are thin layers of metal or metallic oxides that are deposited onto the glass during manufacturing. They are invisible to the human eye, but reflect heat back away from the surface. This can be useful in both hot and cold climates, but modern glazings are customized for different climates. If you live in a cold climate with more heating than air conditioning needs, then look for windows with a high solar heat gain coefficient (SHGC) to use the sun to help with heat in the winter. If you live in a hotter climate where air conditioning is the greater concern, then a low SHGC window will help keep you cool in the summer.

In the past, some windows featured adjustable blinds between the window panes. Although this kept the blinds free of dust, it compromised window efficiency and aesthetics and also was prone to breakage. Modern technology, like electrochromics, can create windows that have built in shades with none of the previous downsides. These technologies rely on an electrical effect to either leave the window clear as normal or provide shade and privacy. When open, they look the same as any other window, and their electronic nature means that they are very reliable while preserving the window’s thermal efficiency. As you can see the technology going into windows isn’t all that meets the eye.  Many of the greatest advancements are meant to work seamlessly with any style home and function inconspicuously to keep your home energy efficient, safe and private.  If you’d like to learn more about any of the homes featured here, or discuss some of the most popular window choices timber frame homeowners are making, please contact Timberpeg.