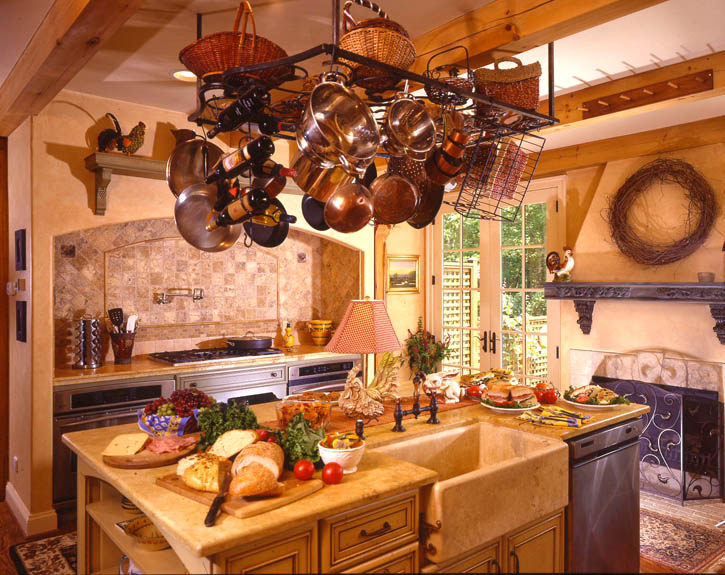 Today, the kitchen is often the social center of the house, with its appearance and function being dictated as much by entertaining concerns as by everyday meal preparation. From antiquity until just a few decades ago, however, the kitchen was a much different space. Hidden from visitors, the kitchen was a strictly utilitarian space that was spartanly appointed. In this post, we’ll explore how the kitchen evolved into its present form. In Ancient Greece and Rome, kitchens were only common in wealthy homes. Cities often had communal kitchens where commoners would cook their meals. Greek homes were designed in the atrium-style; the kitchen was a separate room off of the atrium. Roman villas also kept the kitchen in a separate room, both in order to keep the slaves working there, separate from the rest of the house and to keep smoke out of the living spaces. 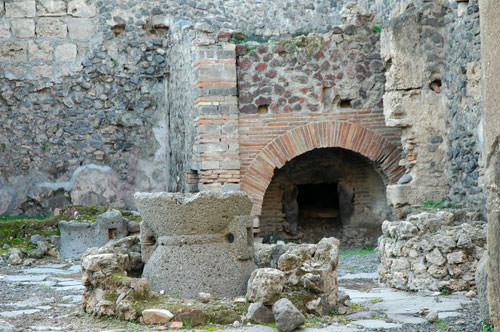 The ruins of Pompei provide a fascinating glimpse at the kitchens of the ancient Roman empire.

The chimney could have done wonders for reducing smoke in the home kitchen, but it remained mysteriously absent from even wealthy kitchens for centuries. Ancient Roman commercial bakeries used rudimentary chimneys, but the first example of a chimney in a European home is not until the late 12th century. Even so, the chimney did not become popular in wealthy homes until the 16th century. 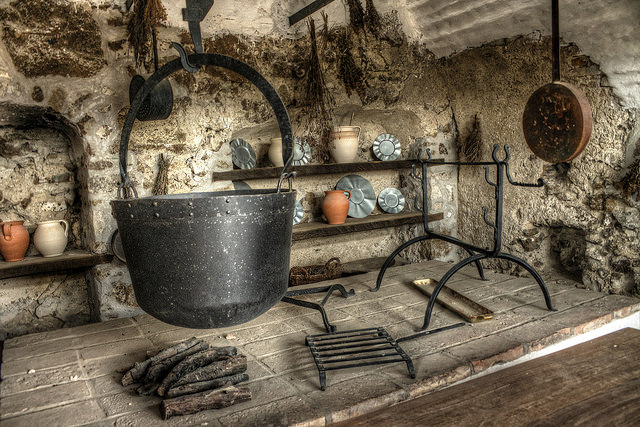 As a result of the lack of chimneys, as well as the high cost of wood fuel, medieval homes typically had one fire in the middle of a one-room home with a hole in the roof to vent smoke. The kitchen area was simply the space between the entryway and fireplace, but the wealthy may have had up to three kitchens. Given this crude construction, it is no wonder these primitive cooking spaces were called “smoke kitchens.” By the late Middle Ages, masonry heaters took over the job of heating the home and the kitchen fire (now with chimney) moved from the center of the house to a wall. Since work in the kitchen was still considered menial work, to be done by servants if possible, the room was placed away from the entertaining areas of the home. Kitchens typically had free-standing rather than built in cabinetry, and the finish and construction on these pieces was much simpler than the rest of the home. 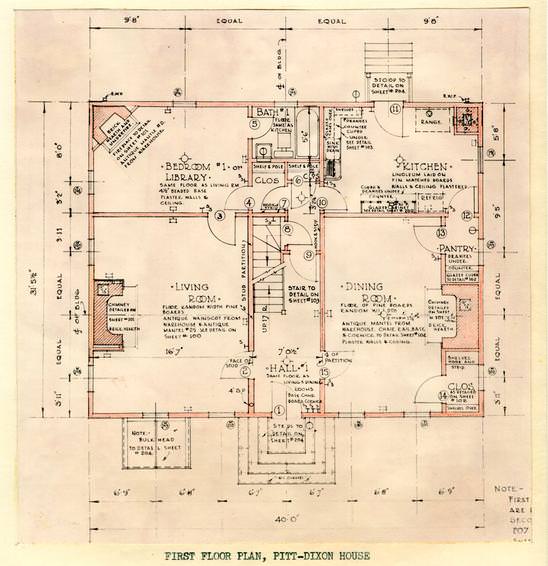 The Pitt-Dixon home of Williamsburg shows the traditional home layout that relegated the kitchen to the rear quarter of the home, away from the eyes of visiting guests.

Technological innovations from the mid-18th to mid-20th centuries made kitchens more pleasant to work in, but did not change the kitchen’s role as a utilitarian space. Iron stoves became commonplace in the late 18th-century, with the Franklin stove an early example. In Industrial Era apartments, the kitchen was located in the main room since that was the only space available. Since upper-class families could still segregate their kitchens away in the rear of the home, this became the common choice for kitchen location as families became more affluent in the mid-20th century. 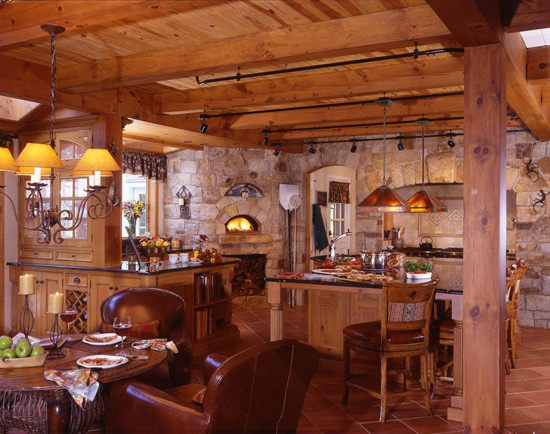 A modern kitchen in a timber frame home can be an open and inviting space, with plenty of room and comfort for guests to gather and enjoy the company of the chef.

Although kitchens of this time had built in cabinets and even electric stoves and dishwashers, mid-century homes still wished to hide the clamor and smells of the kitchen from visitors.

Within the past three decades, however, the kitchen has finally come to the forefront in home entertaining. Partly this is due to advances in items like range hoods to vent kitchen smoke and odors. The kitchen has also become more public as a reaction to frozen and prepared meals. Now, cooking is seen as a creative endeavor of higher status than in years past, as well as something that should be shared with guests. Modern homeowners also enjoy being able to socialize with their guests while cooking and being able to watch their children when preparing meals and cleaning up. As a result of this convergence between modern technology and attitudes toward cooking, the kitchen has finally become the center of home entertaining and design. As you can see, the kitchen has evolved quite a lot over the years.  If all this talk of design shifts has left you wanting to plan a timber frame kitchen of your own, then contact the team at Timberpeg.  Their staff of designers is sure to help whip up a delectable design guaranteed to satisfy.