What to put on your barn home walls and ceilings? 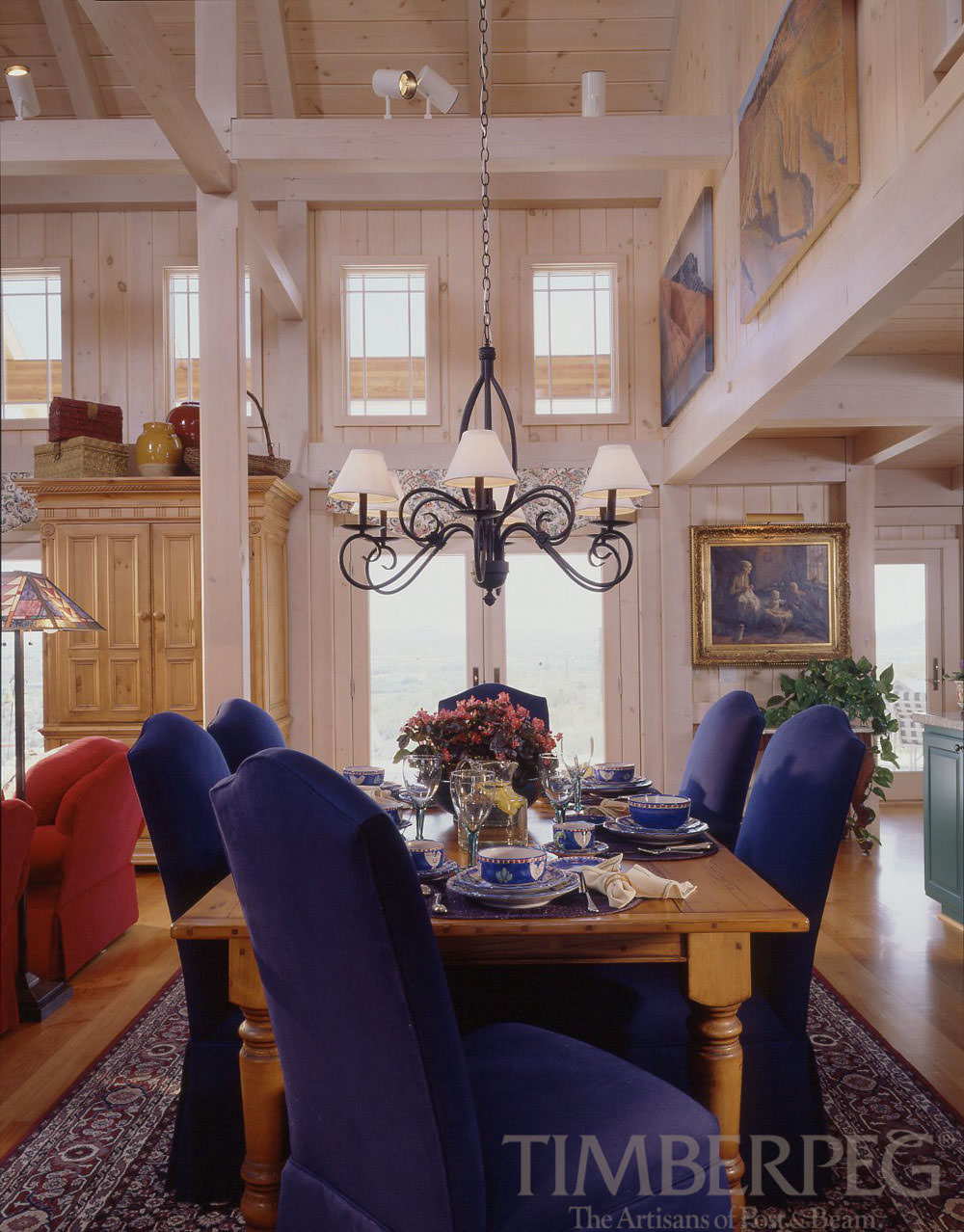 Before you can even start to consider the color of your barn home walls, you have to stop and think about the material first.  There are a lot of options to consider; from plaster and drywall, to tongue and groove boards.  Each adds its own character to a barn home, and we’ll highlight some of the options below.  We’ll start with barn homes with low contrast walls and frames, and then move towards barn homes with high contrast between the post and beam frame and the walls.

Low Contrast between Frame and Walls:

This barn home (shown above) was built in the desert Southwest.  The photo of the dining space showcases a post and beam frame and tongue and groove walls which are both finished in a pickled white.  This low contrast between frame and barn home walls makes for a seamless look where the post and beam frame is no longer the main focus, but instead simply becomes an integral piece of the design aesthetic.

This post and beam coastal cottage (shown above) was built near Cape Cod.  It also has a very low contrast between the frame and walls.  Unlike the first photo though, this coastal cottage uses a combination of drywall and whitewashed tongue and groove material.  This pickled white finish is a perfect fit for a coastal home that embraces the windswept, beachy look.

Medium Contrast Between Frame and Walls:

This post and beam home (shown above) is more of a western lodge style of home.  It was built in Nevada, and the homeowners wanted to reflect their taste for rustic western style.  They chose to finish the walls and ceilings in a blonde tongue and groove which was only slightly lighter than the shade of their Douglas fir post and beam frame.  The result is powerful and masculine, while at the same time open and airy.

This post and beam farmhouse (shown above) was featured before in our “Modern Farmhouse” post.  As you can see in the photo above, the homeowners chose to finish their walls in drywall which was then painted a soothing shade of sage green.  The cool tone of the green color makes for a pleasant contrast with the warm red undertones of the Douglas fir frame.  The look is subtle though, and far from being over saturated, the look is calm, restful and well balanced.

This barn home kitchen (shown above) is from a home built in Ohio (see our post and beam homes photo gallery under “Chagrin Falls, OH” for more photos).  The post and beam frame is a neutral finish and the barn home walls are drywall which has been painted a warm golden hue.  The yellow tone is just right to compliment the frame, but still provide a bit of contrast.

High Contrast Between Frame and Walls:

This barn home (shown above) has a medium finish on the frame, but a very light finish on the tongue and groove ceiling, and white painted drywall on the walls.  This treatment helps to make the post and beam frame more prominent.

Finally, this post and beam home (shown above) was built in New London, NH.  Thanks to the contrast between the deep tones of the Douglas fir post and beam frame and the pure white of the drywall ceiling and walls, this room really pops.  Even the window trim has been painted a shade of white to further add to the contrast.  This high level of contrast lends a feeling of sophistication and modern elegance to the room, despite the heavy nature of the frame used in this home.